MINNEAPOLIS — Kennady Wade, editor of the Kirkwood (Mo.) High School student newsmagazine and website, has been selected as the winner of the $1,000 Wikoff Scholarship for Editorial Leadership by the National Scholastic Press Association.

“As a writer and editor, Kennady is constantly on the hunt for a better understanding of just about every facet of journalism,” Mitch Eden, adviser of The Kirkwood Call and TheKirkwoodCall.com, said.

As editor in chief, Kennady manages a staff of more than 100 of her peers who produce ten newsmagazines per year and update a media website daily. The newsmagazine earned a 2016 NSPA Pacemaker and the website was named a 2017 NSPA Pacemaker finalist.

“Her writing is clear, creative and expressive. She tackles tough topics and does so with responsibility and depth,” Eden said. “The content she produces is thought provoking, balanced and ethically responsible.” 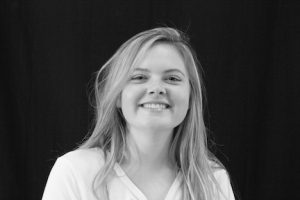 Kennady submitted the following opinion pieces with her application:

Kennady Wade’s writing skill catapulted her to the top of a competitive field of applicants. Her editorials on the school district’s failed tax levy, gun control and sexual assault showcased her understanding of complex issues on the local and national level.

Presented with clarity, focus and research, her editorials presented a mature approach to difficult issues. It was obvious she has a clear understanding of the purpose of the editorial and was able to articulate her editorial board’s stance on important issues affecting the student body.

In recognition of his service to NSPA as its executive director in the 1970s, NSPA has offered the Wally Wikoff Scholarship for Editorial Leadership since 1998.

The $1,000 award is given to a high school senior on the staff of an NSPA member newspaper with a minimum 3.5 grade point on a 4.0 scale or equivalent. Three published editorials and a recommendation from the adviser were required.

A total of 44 student journalists competed for this scholarship.